CuDeco discovered the Las Minerale orebody in 2006, less than a year after first acquiring the property in 2005. In spite of numerous groups exploring the property in the 100 years or so prior, including detailed mapping directly over Las Minerale orebody, high-grade mineralisation remained hidden beneath very shallow cover. Since the initial discovery 11 more copper dominated orebodies have been discovered proximal to, or some distance from Las Minerale as the Company’s understanding of local mineralising controls increased.

Desk top analysis has continued however at our EPM’s and in the non-development areas of the Rocklands Mining Lease (ML) where significant geological and geochemical data has been compiled including detailed mapping, stream sediment, soil and rock chip sampling, and a comprehensive drilling record has been amassed from the various bedrock, Reverse Circulation (RC) and diamond drilling programmes that have been conducted over the years.

Highly prospective targets west of the mine development area remain untested, including several large-scale IOCG style targets at depth, and directly along strike from known orebodies including the flagship Las Minerale orebody.

A prospective target corridor some 5km in length and up to 2km wide, which is host to the majority of the Rocklands Resources and Reserves, requires follow-up drilling in many areas.

Additional satellite deposits and/or prospects exist throughout the ML that require extensional and/or infill drilling, including several prospects identified by shallow bedrock drilling that require deeper drilling, and various prospects and where limited exploration has been conducted using both RC and/or diamond drilling including; Fairfield (Cu-Co-Au); Solsbury Hill (Cu-Au); and Wilgar (Au-Ag-Te-U).

Wilgar in particular is host to extremely high grade precious and other metals, including individual 1m assays from drilling up to:

EPM18054 is prospective for similar copper-gold mineralisation as that found at the neighbouring Rocklands Mining Lease. Sub Audio Magnetic (SAM) surveys have been conducted and significant high-priority targets identified. SAM was highly successful at identifying mineralised structures at Rocklands.

Low-level exploration is underway at EPM18054 including field reconnaissance, geological mapping, soil and rock-chip sampling, and bedrock drilling. Several anomalous copper zones have been identified and will be followed up in future exploration.

At the end of 2015, a shallow Rotary Air Blast (RAB) bedrock drilling programme commenced at the first of several priority exploration targets, and visible fine-grain native copper, (and minor malachite and chalcocite) has been observed in many holes. Copper grades are not expected to be high, and the significance of this development is yet to be determined. 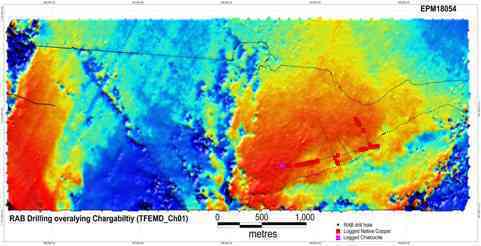 Above Image: EPM18054 (Chargeability survey – CH1) showing completed RAB drilling along existing roads and the first of several planned priority target areas to be tested. Observed fine-grain native copper appears to correlate well with the target area, however the programme is ongoing and results should be seen as preliminary only.

The RAB bedrock programme is designed to drill to the depth of “first refusal”, typically to the base of weathering which can range from 3m to 12m generally, but with occasional deeper zones to 18m. The last metre is then sampled for analysis and drill chips logged for lithology and minerals present.

Once the current programme has been completed at this initial target, and sufficient analysis conducted, a follow up Reverse Circulation (RC) or diamond drill programme will be planned to test. 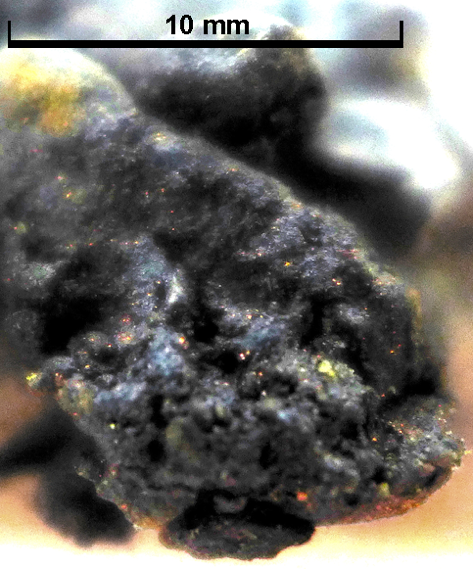 Above Image: Observed copper minerals including fine-grained native copper in RAB chips. Samples The occurrence of native copper is widespread and has been observed in most rock types encountered in the target area to date. The image shows fine native copper and possible chalcocite in highly-weathered rock matrix (tending to clay).

EPM25426 will be concurrently explored with EPM18054 due to several interpreted structures of interest, and significant targets straddling both properties.

Initial field reconnaissance work has been undertaken in select areas and is ongoing. Access approvals are underway. 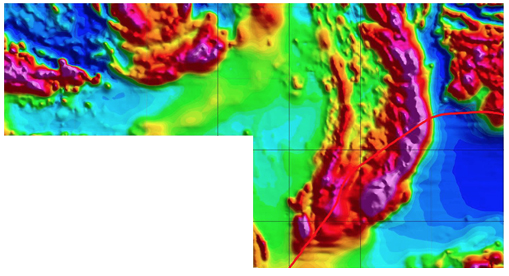